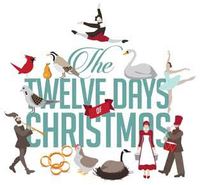 The Meaning of the 12 Days of Christmas

December is by far the most popular month all over the world. Why? Because it’s the

Christmas Season! It’s not just Christmas Day that fills you with joy by being surrounded

with family and friends (and Christmas presents), but the entire month has a more

uplifting, happier spirit of community. However, did you know that the actual Christmas

season starts on Christmas Day itself? Well, December 25th is the official beginning of

the 12 days of Christmas, a much talked about Christmas tradition.

Meaning of the 12 Days of Christmas

There are two explanations given to the meaning of this Christian tradition. According

to Christian theology, 12 days of Christmas is a period between the birth of Christ, and

the beginning of Christianity, to the coming of the three wise men or the Magi. Therefore

King’ Day or the Epiphany).

Also, the 12 days of Christmas refers to a popular Christmas carol. In this song, the

during this period of the 12 days of Christmas. One unique thing with the song is the

start with this verse:

On the first day of Christmas,

My true love sent me,

A partridge in a pear tree

verse builds on the one before it all the way to the 12th verse.

Origin of the Carol, ‘12 Days of a Christmas’

This Christmas carol has unclear historical origin. However, the earliest version of the

song is said to have featured in a book by the title, Mirth With-out Mischief, which is a

children’s book written around 1870. According to historians, the song is of French

origin and was first published in England as a poem, having no musical rhyme or chant.

history. There are some that mention ‘ships a-sailing’ or ‘bears a-baiting’ while others

talk of the gift giver as the mother to the singer instead of the ‘true love’. In most of the

composer by the name Fredrick Austin in 1909.

What the controversy behind this Christmas carol?

The claim that this carol is a Christmas song has received lots of criticism. The view that

practice their faith, has been greatly questioned and corrected. Critics of this claim point

as a catechism song to teach their faith secretly to their young Catholics.

All in all, 12 days of Christmas is a popular Christmas tradition surrounded by a lot of

Christmas carol, the 12 Days of Christmas.

Watch this kids animated version of The 12 Days of Christmas by Hoopla Kidz: