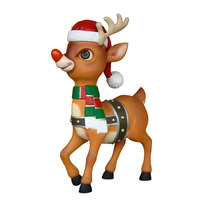 What is Christmas without the most popular reindeer of the group, Rudolph the red nosed reindeer, the first name that comes to mind when we relate to Santa's Reindeers, above is an image of a modern life size 1.3m Poly-Resin Statue Red Nose Reindeer. The story of "Rudolph the Red-Nosed Reindeer" appeared in 1939 when the Montgomery Ward stores in the United States of America gave away 2.5 million copies of the story that was written by the 34 year old Robert May of their advertised department. Rudolph's original name was supposed to be Rollo, then Reginald, but the executives of the retailer group Montgomery Ward didn't like the names. Rudolph was named by the Author's young daughter. Rudolph's fame started with a book, then a song, comic book, animated television movie- series and so on. Rudolph nose was so red and bright that he was placed at the front of the reindeer's for more extra light for Santa Claus- Father Christmas.