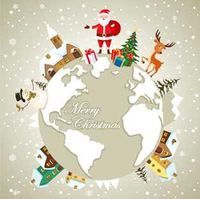 Although Christmas traditions are completely different from culture to culture, the

atmosphere that brings the most joyous holiday is the same everywhere. In all parts of the

world, for those who celebrate it, Christmas is a day of love, gratitude and family gatherings.

Here are some of the Christmas traditions around the world.

the house and preparing gifts. On Christmas Eve, the stocking are putted on the edges of

the bed or on the chimney, where there Santa leaves gifts. Christmas begins with the

opening of gifts and lunch after which a televised speech follows the royal family. In the

afternoon are visited neighbors and relatives. During Christmas dinner custom is serving

which there is a "treasure".

mistletoe. Mistletoe garlands adorned the doors and homes, and anyone who is found

beneath the cornice can be kissed or should kiss someone. In Covent Garden Santa Claus

(Father Christmas) lights the lamps, and on the famous Trafalgar Square there is a beautiful

tree and, of course, mistletoe.

On Christmas Eve, children leave their shoes by the fireplace in order to Santa Claus (Pere

are also hanging from the tree. In the north of France, children are bestowing on December

6th, the day of St. Nicholas instead of Christmas. Adults are each donating to the New Year.

Church bells on are playing Christmas songs. In the square, near the cathedral, are showing

the birth of Christ.

Almost every home has a nursery, around which actually spins the whole Christmas

celebration. Nursery contains clay figurines called Santos, which in December are sold at

Christmas fairs in Marseille and Aix. Figures except that depict St. Family and pastors often

Noel. The same trunk, to previous time of period, was burned to drive away the ghosts that

light. The cake is served with other foods during Le Reveillon, very late dinner after midnight

Mass on Christmas Eve. The main dish varies on regional culinary traditions, and in Alsace

served goose, in Burgundy turkey with chestnuts, while Parisians celebrate with oysters and

pate from goose or duck liver (pat de foie gras). After dinner, when the family goes to bed,

leave the food on the table in case of a Virgin Mary.

17th century. In 1840, the Duchess of Orleans conveys the Christmas tree in Paris.

Christmas season lasts for three weeks and starts 8 days before Christmas, known as the

Novena (Novena). A week before Christmas, the children go from house to house dressed

as shepherds and singing Christmas songs for what they are getting money. The real

After sunset shot from a cannon at Castel S. Angelo in Rome marks the beginning of the

holiday season. In the 21 hours in the church begins Holy Mass. After the mass approaches

the holiday meal with family starts. On Christmas Day at noon, the Pope gives blessing to all

who gather at the Vatican square.

consists of Torttelini in Brodo, soup with stuffed pasta and Capone, boiled or baked rooster.

Gifts are drawn from the so-called urns of fate in which there is always one gift for each.

While in other parts of Italy, the children their gifts can only open on January 6, the

Epiphany. According to tradition, brings gifts ugly witch called La Befana on the handle of

her broom. La Befana is scheduled to visit the newborn Jesus, but she was late and erratic

since then, leaving gifts in every house for children in the case that Jesus is there. Comes

Hyvaa Joulua! As in many countries, one of the main features of the Christmas is the

Clean the whole house, and a lot of time is spent in the kitchen in the preparation of various

dishes. When everything is taken care of, be sure to go to the steam bath before preparing

the Christmas dinner. Food is served between five and seven, and gifts are exchanged

before or after a meal. Also, throughout Finland, especially in rural areas, residents in the

yard birds leave crumbs and they are not having dinner while birds do not eat their meal.

Christmas day begins at six o'clock, when people go to church and remind us that this is a

time of love and family gatherings. It is interesting that on Christmas Day people go to the

cemetery to light candles in memory of the dead.

Greeks celebrate Christmas on December 25. One of the most important symbols of

Christmas in Greece is St. Nicholas, patron saint of sailors. Witnesses say he saved the

ships that were sinking, and therefore now each ship carries its icon. On Christmas Eve, the

boys with drums and triangle are going from house to house and sing songs. Exchange for

dried fruit, almonds or gifts. Fasting forty days before Christmas, and on Christmas Day they

are preparing fat dishes. In Greece, you will rarely find a Christmas tree adorned, but any

wooden containers with holy water. On the day of Saint Basil, the first of January, they

exchanged gifts, and are known for custom of giving gifts to hospitals and orphans.

In Russia, Christmas is replaced with celebration of winter. However, traditional Russian

Christmas is celebrated praying as much as 39 days, until January 6, then starts the 12-

course dinner in honor of the 12 apostles - fish, beet soup or borscht, cabbage stuffed with

Crucian carp is a traditional Christmas figure who distributes gifts to children. Her name

cold weather. However, she regretted it and went after him with a full basket of gifts. She

They believe that gifts give the Sjeguroška or snow women and Santa Claus, who is called

Daddy; it does not follow the reindeer, but the girl (flakes) and a boy (New Year). On that day

children eat black bread, which is located in the hanging socks, telling poems and sing

However, the real Christmas according to the Julian calendar, takes place on January 7, and

announces him the Morning Star. Russians celebrate this holiday with family, in peace and

quiet. In Russia, 25 December is a normal working day, is celebrated on 31 December,

Early in the morning on December 13th, the day of Santa Lucia, girls wear formal white

dresses and headpieces of evergreen wreaths, to which are attached to the candles. Then

they wake up the parents and give them bread and coffee. This custom dates back to the

fourth century and symbolizes the return of the star. Residents of Sweden kite tree two days

before Christmas, and on January 25, go to church, which is completely decorated with

candles. Swedes like any other people today believe in Santa Claus or Tomte Swedes as it

is called, however, the old legend says that brings gifts Christmas goat - Julbock - goat that

was allegedly used the Tor (old god) for transport.

Beside that only one percent of people in Japan celebrate Christmas, those who worship

Christmas". Most of them decorate a Christmas tree Temari with balls that are handmade,

and a Buddhist monk becomes Santa Claus leaving presents for children in the house.

In China, a very popular tradition is decorating the Christmas tree ornaments that children

themselves make. The decorations are mostly in the form of paper chains, flowers and

children new toys or clothes. Those who are not religious or do not celebrate Christmas, in

this period are happy for the Spring Festival.